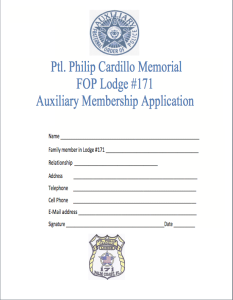 CLICK ON THE ABOVE IMAGE THEN (CTRL-P to print)

In 1920, a group of wives of Pittsburgh, Pennsylvania police officers gathered to discuss issues concerning their husbands and their jobs. This was the birth of the first “FOP Ladies Auxiliary.” In 1941, Kathryn M. Milton became the first national president of the Ladies Auxiliary. Since that time the Auxiliary has grown to over 1,900 members in 100 subordinate Auxiliaries representing 28 states.

In 1985, membership eligibility that originally allowed only females as members was extended to family members (18 years of age or older) of any member of the Fraternal Order of Police. In 1987, the name of the organization was changed, dropping the word “Ladies” to reflect the growth in membership of the organization.

In August of 2019, the Grand Lodge Auxiliary convened for its 39th Biennial Conference in New Orleans, Louisiana.

The following direct email addresses are available for members:

Iconic One Theme | Powered by Wordpress